From April 14 to May 5, 2007 the town of Alcala de Henares held the first International Organ Festival. Cathedral-Magistral hosted this musical event. The protagonist is Blancafort organ.

On Saturday, April 14 inaugurated the first edition of the International Organ Festival “Ciudad de Alcalá” in the Cathedral-Magistral of Alcalá city, in the presence of the diocesan bishop, Bishop Jesus Catala. Before the ear of more than 400 people including many children accompanied by their parents, the Swiss organist Guy Bovet played for about an hour pieces of Buxtehude, Scheidt, Bach, Franck and Liszt.

Following the presentations by the heads of the Cathedral and City Hall, organist himself commented on some aspects of the repertoire chosen for the inaugural concert. After the recital the repeated applause from the audience Bovet the teacher forced to sit on the bench again Body to interpret a new work. Upon leaving the event, the organist said Lucía Riaño

could not have picked a better performer or a better program for the inaugural Festival. It was a memorable concert 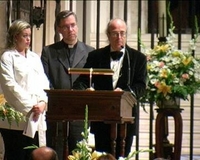