DISCOVERY OF THE ORGAN SOUNDS

On the afternoon of Sunday 29 April a large number of parents and children attended the event at the Complutense Magistral to enjoy the educational introduction to the world of Body by Eva Alonso, vice president of Jeunesses Musicales Alcalá, who gave way with brief explanations on the actions of Liudmila Matsyura, organist of the Cathedral. 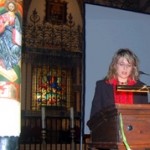 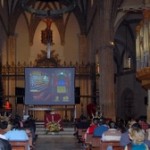 Parts of the Body, the different types of pipe, logs, keyboards and a variety of tones and sounds were illustrated by various interpretations of the organist, who could be seen in action on the huge screen installed in the Cathedral. This way everyone could track the movements of hands and feet of the performer, proving the musical richness of this instrument and the expertise needed to exploit its many resources. Memorable was the only piece played with the feet on the pedal, a true marvel of agility and virtuosity. The young trumpeter Antonio Tasty completed the evening with his participation in two of the pieces performed.

From the Festival would like to thank the company Zero Digital Media participation in the event, enabling the transmission of images of the organist. Children and parents enjoyed learned thus: goal achieved!