On Thursday April 19 held at the Cathedral-Magistral a new act of the International Organ Festival “Ciudad de Alcalá”.

With the help of a large screen installed in the temple ProfessorPedro Ballesteros spoke on the historic organs that had the templemaster before the fire of July 1936. Despite the scarcity of documentary sources, the lecturer provided extensive data on the physical, technical and musical of the two bodies-Gothic andBaroque sadly missing in the wake of the Spanish Civil War.

The numerous images and photographs projected surprised many in the audience, for being a graphic testimony of inestimable value to the knowledge of organ heritage and music of the Master.

Following the presentation the teacher was shown a montageBallesteros sent by Albert Blancafort organ builder, who could not be present at the ceremony for health reasons. The current Bodybeautiful images were accompanied by a simple explanation of the various parts of the organ, their components and operation. Thiswas very instructive for the audience less familiar with the world ofpipe organ.

The event culminated with a brief recital offered by the organist of the Cathedral of Alcalá, Liudmila Matsyura, who played a Vivaldiconcert on the organ by Bach adapted. 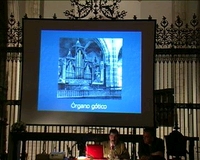