GREAT SUCCESS OF THE SECOND CONCERT OF THE FESTIVAL

On Saturday, April 21 marked the second concert of theInternational Organ Festival “Ciudad de Alcalá”. On this occasion the interpreter was the organist of the Cathedral-Magistral LiudmilaMatsyura.

For an hour the Russian organist performed works by Buxtehude, Bach, Franck, Mussorgsky and Butusova, the German Baroque to Russian nationalism, through the French romanticism. An intense and varied concert, which could determine both the technical excellence of the performer and the sound quality of the instrument. 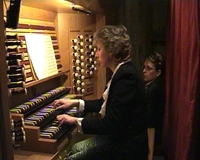